Thoughts on a SpaceX Lunar Architecture

October 07, 2010
It's no secret that the SpaceX Dragon capsule has a very impressive heat shield believed to be capable of direct lunar return. Official statements from SpaceX that they intend to add deployable landing gear and leverage the thrusters in order to land on land in the future prompts an obvious suggestion: if it can land on Earth, could it land on the Moon too? 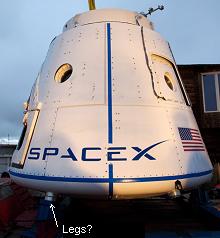 The Dragon capsule has thus far been launched on the Falcon 9 booster, and although that booster is able to put 2473kg into lunar transfer orbit, after using the Draco thusters on the Dragon to enter low lunar orbit the total mass would be under 1876kg.. this seems a bit light for a crewed configuration, especially when you consider that only 1422kg of it could be returned to Earth. And that's just lunar orbit.

We need a bigger rocket, and the official SpaceX plan right now is called the Falcon 9 Heavy. One should not be confused by the name, the F9H is not "heavy lift" in the sense often used by space advocates and policy makers - who should more correctly be using the term super heavy lift. So how heavy is the F9H? Comparison is usually done in terms of lift to LEO, but for our purposes lift to LTO is more interesting at 10622kg. A slight improvement on the Delta IV Heavy at 9984kg.

Now we can imagine a Dragon-lander flying direct from lunar transfer orbit to the surface, it would have a mass of 3766kg when it landed which is quite respectable. For a cargo flight this is fine, delivering 2737kg of payload, but it's unlikely the vehicle would have enough fuel left to attempt an ascent.

Having determined that a single stage direct descent vehicle is unlikely, we're now forced to choose a mission mode. The size of the launch vehicle has already dictated that LEO should be bypassed, so our choice comes down to lunar-orbit rendezvous (the mode used by Apollo) or lunar-surface rendezvous, aka, refueling on the surface. So much has been said about LOR already, so let's run the numbers for LSR.

Having landed a crewed Dragon-lander on the surface, and assuming no fuel is left, we would require 6014kg of propellant to return to Earth. This is not too bad, at 3 fuel landings, but we can do better. If we can carry just 540kg of fuel in reserve we can eliminate the third fuel landing. Another alternative is to throw 338kg of payload out.

Of the 2737kg payload delivered, we have to determine how much is needed for the crew and their supplies, and how much can be fuel. The pressurized volume of the Dragon is 10m^3 requiring 11.839kg of air to fill. Without an airlock we may wish to cycle that a few times, so let's say 118kg total. Next we need a one week supply of oxygen candles at 25.83kg per person, and LiOH to scrub the CO2 at 52.71kg per person. Finally there's food and water at 45kg per person. For a total of 488kg for a crew of three. Too easy! This leaves 1708kg for spacesuits and equipment.

Once on the surface, the crew would vent the chamber, get out and refill the fuel tanks. Having gravity, transferring the propellant is well understood. Return to Earth would be direct, with no need to enter lunar orbit or perform a rendezvous. As no parts fall off the Dragon-lander on the way it could be fully reusable, providing a stepping stone to in-situ produced propellants.

I estimate a Falcon 9 Heavy / Dragon-lander cargo configuration would cost around $40k/kg to the lunar surface. With the two fuel emplacement flights, this makes crew transport something like $130M/seat for crews of 3, but you could conceivably get that down to $55M/seat if you were delivering 7 at a time - most likely to some kind of base as they would have reduced volume for equipment.

Most of my calculations were done with this rocket equation calculator and I used an inert mass fraction of 0.15 for the lander.
commercial space moon spacex

If you're anything like me you've probably seen the Disk Not Ejected Properly message so many times that you've forgotten how annoying it is.. despite the fact that you never even wrote anything to the usb drive that you're yanking out of your Mac the operating system insists that you remove it "correctly". You're supposed to click the eject button. Why? I dunno, Apple seems to think that if you can write to it then the operating system might have written to it - and being Apple, they probably have. Well ya know what? Fuck you, I won't do what you tell me. Note: this will not fix your external drive disconnecting when your Mac goes to sleep. For that problem try disabling "put hard drive to sleep when possible" in both the Battery and Power Adapter tabs of the OS energy saver settings. What appears below is a dirty hack for deliberately removing a warning that Apple insists on showing you every single time you yank out a usb stick.
Read more

Living Inside An Asteroid

Deriders of the new NASA direction have latched on to the announced human asteroid mission in the 2025 timeframe as something they "can't imagine" and therefore is not worth doing. Of course, the administration is talking up the "science" that can be done on an asteroid, and how this could better inform us should the need arise to divert or destroy one that threatens Earth. This is good politics as nothing motivates like fear, but for those of us who think the human spaceflight program is really about preparing us to live at the future homes of humanity, asteroids would seem to be just a stop on the way - I disagree. As I've written previously, the new NASA direction isn't about asteroids - it isn't about destinations - it's about going and specifically, it's about going to Mars. I'm not sure NASA knows yet why they're going to Mars, but they're focusing on the technology to get there and get back safely, and some of the
Read more

October 13, 2020
The Three Amigos (Written at 3:33am) Three friends go to play in the Park.  Starting in The Matrix they spend most of their time talking about Red Dwarf and planning hijinks. One of the three has a way to communicate with a friend (the fourth Amigo) who works for the Park.  They run from agents, and plan to break into West World and rob a bank, until one day an Agent dies… for real. This Agent is controlled by the mother-in-law of the female CEO. She's old and demented but she loves to jack into The Matrix, and she's good at keeping thieves out of the Park. While chasing one of the Amigos down a spiral ramp she wraps herself in a cord and spills water on herself. It's a known flaw of that old deck. The Amigos learn about the tragedy on the subway. They discuss it in a hushed conversation. Two wants to leave - the game is over, he didn't want to kill anyone for real - but Four tells The One that they'll be arrested and charged as soon as they're out - and she
Read more