October 01, 2010
For too long the aspirations of NASA have not matched the budget allocated. Building the International Space Station has been a decade long effort, now finally reaching completion, and until just recently the plan was to splash it into the ocean before moving on to "the next thing". For a while, that was a return of humans to the Moon, but the recognition that the necessary budget would not be forthcoming has pushed that goal so far into the future that it doesn't even make much sense to talk about it anymore.

Today, the focus is on making a new heavy lift vehicle, finishing a big heavy capsule to go on it, and considering the possible missions that could be done with that hardware should it ever be finished. At the same time, technology development and commercialization of ISS resupply promise to free up some existing budget dollars to pay for the lunar landers and prepare for the next next thing: Mars.

This has prompted many to ask: what if we didn't need heavy lift? What if NASA could do deep space exploration without it? I know what you're thinking, propellant depots, right? Not this time. I've talked about propellant depots, enough, let's talk about something completely different.

In this paper David L. Akin has made the case for ISS crew rotation, two lunar missions per year, and a "flexible path" mission every second year, using only storable propellant stages and the existing Delta IV Heavy. He's done the sums and says the whole thing could be done for less than the current NASA budget for human spaceflight. 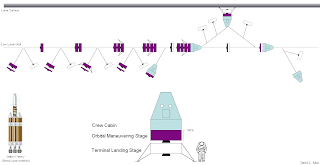 Here's how it works. First off, the Delta IV Heavy (or some similar launcher should it become available) needs to be human rated. That's expected to take $2B and 5 years. A five ton crew module is developed - it's about 70% larger than the Soyuz - for $2.5B. With just these two components ISS crews can be rotated and this will likely happen anyway under the commercial crew development program. One thing to keep in mind, though, is that the heat shield has to be able to do direct reentry from the Moon, something only the SpaceX Dragon and the Orion is planning at this time.

Simultaneously, an Orbital Maneuvering System is developed. This is similar to the service module on most crew spacecraft, in that it uses storable propellants and is expended after use. A common configuration is used for multiple maneuvers: lunar orbit injection, lunar descent, lunar ascent and trans-Earth insertion. A modification of the Orbital Maneuvering System is required to do the final landing on the Moon. Landing legs need to be added obviously, deep throttling and possibly restarts will need to be supported. These changes are significant enough that it deserves a new name, so Akin calls it the Terminal Landing Stage.

And that's it. The paper explains a few of the more interesting details. For example, for non-ISS missions LEO is completely bypassed, with direct lunar injection of the stages. All the rendezvous and docking happens in low lunar orbit, and by careful management of the loading of propellants stages, can be fired sequentially to generate the necessary delta-v for each maneuver - there's no need to transfer propellant from stage to stage.

Peak funding comes at the end of the development of the program (where it belongs!) and is less than $3B/year. Yes, that's right, Akin says we could have ISS crew rotation, 2 lunar missions a year and a flexible path mission every alternate year for less than what was being spent on the Shuttle program during it's peak. That's the value of leveraging existing hardware.

* Thanks to Ralph Buttigieg for sending me this very interesting paper.
commercial space nasa