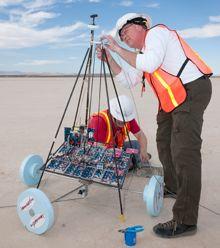 Space Solar Power has a bad rap, caused predominately by advocates who can't separate the exciting long term vision from the short term facts. In his recent paper, Al Globus has tried to rectify this by investigating what can be done with demonstrated launch vehicles, solar collectors and power beaming (and without on-orbit assembly, manned outposts, lunar materials, etc). His conclusion is that it appears space solar power is now ready for niche markets, such as forward military bases, where the price of power can be as much as $1/kWh.

The low cost launch vehicle of choice is, of course, SpaceX's Falcon 9. High specific power solar collection is achieved using thin-film heliogyros as demonstrated by the Japanese Ikaros satellite. The power beaming technology is infrared laser with custom solar panel receivers, as demonstrated by LaserMotive in their win at the Space Elevator Games last year.

A minor improvement in Globus' architecture is apparent. The mass of the spacecraft was estimated based on the throw capability of the Falcon 9 to geostationary transfer orbit (GTO), presumably because a solar sail style flight is expected to circularize the orbit, and solar sails can't start from low earth orbit (LEO). This is an implicit trade over a solar electric style flight from LEO, which I'm guessing is intended to utilize the solar collector for double duty in order to avoid additional mass. I'm not sure this trade wins. Even with a SMART-1 performance thruster, starting from LEO places 7751kg in GEO, 3.2 tons more than the estimated mass in the paper. If a NEXT thruster is available, the improvement goes up to 5.2 tons. However, this improvement only doubles the performance of the system, perhaps halving the price of power at the meter, which still doesn't make it competitive with the grid.

The problem is scale. Globus should be commended for describing a space solar power system that is achievable with current technology and could even make a profit in some niche markets, but let's think just a little bit further ahead for a moment. LaserMotive continues to improve the performance of their laser power beaming systems, so the 8% efficiency suggested may soon be on-par with the often quoted 10% efficiency of microwave power transmission. The paper suggests that SpaceX could reduce their prices by a factor of 3.6 if one ordered 1000 launches, but this claim is a few years old now. A more recent claim by SpaceX is that a super heavy lift vehicle could be built that delivers 130t to LEO for $300M per flight, a factor of just 2.3 - but the improved logistics of a single launch may offset that.

It should come as no surprise that reducing launch costs makes space solar power more feasible. What does surprise me is that sufficient specific power improvements in solar collection has been demonstrated which makes it reasonable to choose a lower efficiency beaming technique, with the resulting effect on the mass of the spacecraft making it launchable on existing boosters. This is a revolutionary idea which not only makes sense right now but defines a path for future work that will bring space solar power to the meter.
commercial space solar power space advocacy