How Near Are The Near-Earth Asteroids?

July 18, 2010
Back in 1978, following three successful free flights of Space Shuttle Enterprise the year before and the first lift-off of Space Shuttle Columbia only 3 years away, planetary scientist Gene Shoemaker and astronomer Eleanor Helin collaborated on a paper which presented the then shocking conclusion that some near-earth asteroids required less delta-v to reach than Mars. The near-term availability of the Space Shuttle was key, as the high flight-rate it promised meant a manned mission to an asteroid could be staged in low Earth orbit for as little as 23 flights. At the time, it wasn't unreasonable to suggest that within a few years that would be as little as 6 months of staging, and the vehicle would be reusable!

Of course, the Shuttle's flight rate never got that high, and today's mission designs to Mars are measured in International Space Station masses to remind us of how long it takes to amass payload in orbit.

This paper, however, remains important for the math it contains. Almost as an aside, Shoemaker derives a formula that accurately estimates the delta-v requirement to leave LEO and rendezvous with an Earth-orbit crossing asteroid. He also shows that typical the delta-v requirement for return from one of these asteroids is less than 1km/s. Towards the end of the paper, using data from Helin, he presents this table: 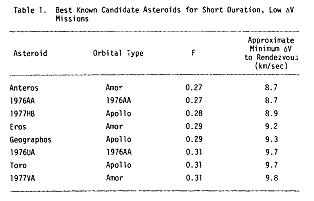 Transit time is important for a manned mission as radiation exposure to the crew cannot be excessive, and the mass of consumables needs to be minimized. However, for robotic mining missions, this table is worse than useless. What is needed is the data calculated at the start of the paper for these targets, and presented in this horrible graphic that no-one seems to understand how to read. 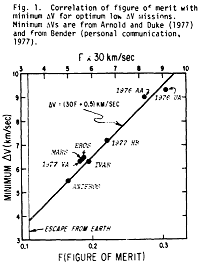 The figure is ugly because it's trying to serve two masters: listing some reference delta-v values, like Mars and some main-belt asteroids, and demonstrating that Shoemakers "figure of merit" technique works for a number near-earth asteroids. The other figures in the paper suffer from the same problem.

So what is the delta-v required to reach Anteros, which Shoemaker identifies as easier to reach than Mars "by a significant margin"? It's 5.391km/s. That was absurd when it was first said. That's about the same as going to a moon of Mars, and most people at the time knew the asteroids were beyond the orbit of Mars. When you considered round-trip, or simple flyby delta-v requirements, it got even more shocking.

What was unbelievable then, is commonplace now. It seems obvious in retrospect that near-Earth asteroids would be easier to reach than Mars.. after all, they're closer. In 1982 an asteroid was discovered and called (4660) Nereus. It has a delta-v (4.979km/s) that is about as easy to reach as lunar orbit (~4.8km/s). That really doesn't make sense to a lot of people. How can something that isn't captured by the Earth be as reachable as something that is? In 1989 it got even better, an asteroid that only requires 4.887km/s of delta-v to rendezvous with was found. It happened again in 1991 (3.998km/s) and again in 2006 (3.813km/s). And there's lots more.

The "free return trajectory" used by Apollo 8 to go around the Moon took more delta-v than that last one. So how low can we go? In figure 4 Shoemaker has scrawled the words minimum "expectable" F by which he means figure of merit.

The arrow seems to be pointing at a figure of merit which we can read as about 5km/s. This is clearly wrong both because Anteros appears on this chart future to the right and asteroids have already been discovered which require less delta-v. So who knows.. but look at what is written to the left. Surely, the required amount of delta-v to rendezvous with an asteroid has to be more than the escape velocity of the Earth, right? From LEO, that is ~3.2km/s.

We know this.. but I wonder if we know it the same way everyone knew the asteroids were all in the asteroid belt, back in the 70s.
asteroids space advocacy