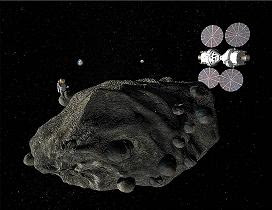 Anyone who has enjoyed my recreational attempts at designing a human mission to a near-Earth asteroid should check out the newly released mission to an asteroid by a team at Lockheed Martin*. The report ends with these important words:

The Plymouth Rock study shows that the first visits to asteroids can be easier and earlier than we have previously thought. The United States does not need to wait for more advanced technologies or develop expensive dedicated deep space vehicles. We can explore the asteroids within a decade, using spacecraft already being developed and tested.

This is a reasonable statement which I agree with. As far back as Apollo the question of "are we ready?" has been asked, and despite the success of Apollo it is still being asked. I have tried to make the argument that a Dragon capsule would be sufficient for a bare-bones mission to an asteroid, assuming some modifications to life support systems, dual use of propellant and supplies as radiation shielding and a whole lot of vigorous hand-waving. This Lockheed Martin study makes the same argument, obviously using their own hardware, and with a level of detail and rigorous breadth of study that puts my amateur efforts to shame. If we don't go we'll never be ready.

That said, they make some statements that go a little further than I have previously, or probably would. For example, consider this statement, which at first blush seems to be making a purely technical argument, but is certainly saying something a little more rhetorical.

It drives the timing of a human asteroid program since it may not make sense to plan a program which provides an initial operational capability during a period such as 2021-2024 when there are no known mission opportunities.

The small number of opportunities means that it may not make sense to design a spacecraft system dedicated to asteroid missions. Rather, asteroid missions would be performed occasionally by spacecraft that are also designed to perform other missions, such as going to the Moon or other deep space destinations.

While I can't find fault with the logic, I think I see a deeper message here. The second paragraph, while representative of a simple fact that I too was surprised to discover in my Prospector's Skymap efforts, is unnecessarily vague about what, precisely, it is recommending. I don't think it is saying NASA should not bother to field an asteroid mission until 2025, as is the President's current plan. This paragraph meant to hint that NASA should hurry up, perhaps even aim for the (2008 HU4) approach in 2016, the year the Senate's proscribed heavy lift vehicle is supposed to come online, lest the schedule slip and slip into the 4 year "asteroid gap".

Bob Zubrin of the Mars Society recently made this argument in a little more alarmist way - it would be a terrible thing if VASIMR and propellant depots became "gateway technologies". The fear is that missions to deep space targets, Mars obviously being the intention, will be delayed until these technologies come online. "We can't go to Mars because we don't have VASIMR yet" they'll say. Unfortunately people are saying that, and the Plymouth Rock study comprehensively shows why it is not the case, at least for 6 month asteroid missions.

However, buried in the technical detail of this study is the answer why NASA is not yet ready to go all the way to Mars with existing technology and vehicles currently under development. The delta-v requirements are bigger for Mars missions than near-Earth asteroid missions, this is true, but the technology development required for a bigger Earth departure stage is minimal - with or without heavy lift. To see the real need for technology development we have to turn to page 13 of the report, and the section titled "Mission Duration".

Unlike Apollo or the Space Shuttle, the Orion spacecraft includes design features which support long missions, such as solar arrays rather than fuel cells for power, and regenerative amine beds rather than single-use lithium hydroxide canisters to remove CO2. Orion is designed to support four astronauts for 18 days going to and from the Moon, with a 180 day unoccupied period in lunar orbit while the astronauts are at the lunar outpost, plus 30 days of contingency loiter capability for a mission extension. This built-in long duration capability is a critical enabler for an asteroid mission.

Orion hardware is already designed for the same mission duration needed for an asteroid mission, addressing issues such as reliability, leak rates, hardware radiation tolerance, and micrometeroid protection. Micrometeroid and orbital debris (MMOD) protection has turned out to be one of the most challenging requirements to meet for long duration missions, since longer missions have higher cumulative probability of impacts.

The duration of a Mars mission is more like 32 months - 8 months there, 500 days on the surface (or, for a Phobos/Deimos mission, in orbit!), and 8 months back, and the crew size is almost certainly going to be bigger than an asteroid mission. The next section on "Life Support" addresses this.

Despite Orion's long duration capability, a five to seven month mission requires more food, water, oxygen, and nitrogen than Orion is presently designed for. Reducing the crew size from four to two astronauts and pairing up two spacecraft quadruples the number of days the astronauts can be supported, to approximately 80 days. A further factor of 2 to 2.5 increase in consumables is required for a 6 month class mission.

Finally, no discussion of deep-space human missions is complete without addressing the radiation exposure problem. Section 10 on page 32 takes the problem head on and contains a great summary of the analysis Lockheed Martin took in the placement of components in the Orion spacecraft to provide good coverage for radiation shielding without adding additional mass. It also advocates an on-need strategy for deployment of supplies as additional shielding in the event of a solar storm. Flying asteroid missions is suggested as an important precursor to a Mars mission, and on this criteria alone that's a good argument.

In short, I think there's a false choice here. Although I agree with the basic statement that NASA doesn't need to design a dedicated vehicle now, and doesn't need fundamentally new technologies to reach the more favorable near-Earth asteroids in early missions, a sustained technology program to improve capability will widen the choice of near-Earth asteroids that are favorable and beat the path to Mars.

* If it's not already up there it should be soon. Thanks to Josh Hopkins for an advance copy of the report.
asteroids nasa space space policy spaceflight