There have been over 535,000 asteroids discovered to date and they're all different. Some 7,121 of them are known to cross the orbit of the Earth and so are referred to as the near-Earth asteroids. If you're interested in flying a robotic mission to an asteroid, you need some idea of how much delta-v your spacecraft is going to need. I've written on this before. However, if you're interested in flying humans to an asteroid, you also need to know how long the round trip is likely to be.

To answer this, one needs to know both how far away the asteroid is at closest approach to Earth, and for how many days it will remain that close. To the interested public, finding this information out using the available NASA tools is a slow process, and understanding what you've discovered is difficult without good visualization. 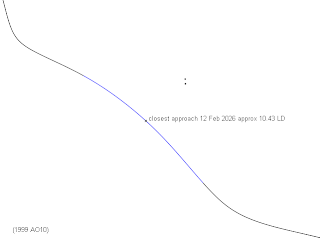 Introducing the Prospector's Skymap, a tool for visualizing Earth-centric plots of asteroid trajectories over the next 20 years, in 3d. Included is ~500 asteroids that have low delta-v rendezvous. The blue part of the trajectory is "within range" of an average human mission duration of 6 months, which can be configured by setting the maximum lunar distance in the range box. See the online help.

In addition to visualization I've been doing some offline data processing. Probably the most interesting result is a list of targets that have low delta-v rendezvous requirements, close approach within 20 lunar distances, sorted by year, for the next 20 years. Here's the csv file.

From this data you can determine which target is most favorable in any given year. If you're after really low delta-v requirements, as well as short transit times, then the list gets smaller.

And the list of known near-Earth asteroids keeps growing.