Rebirth Of The Spaceship

May 27, 2011
Over the last year the space advocate community has splintered into two major groups in answering the question "where should we go next?" Moon First or Mars First. This division was present in the Review of Human Spaceflight (aka Augustine) committee's final report in late 2009, with the surprising conclusion that there isn't the funds for either, suggesting a number of intermediate destinations first - including asteroids. However, as few people consider asteroids to be truly interesting destinations for the human utilization of space (except me!), the debate rages on.

Many Moon First advocates are "Mars Next" advocates while most Mars First advocates are "Moon Again?" detractors. The former claim that Mars exploration will benefit from lunar exploration, particularly in experience and risk reduction, and perhaps the procurement of propellant. The latter claim that lunar exploration is just a distraction and want to avoid the risk of being bogged down by another expensive obligation (read: another ISS).

NASA, and the Congress, is hedging their bets.. declining to select a camp and insisting that the so-called flexible path will have "off-ramps" for either lunar or Mars exploration.

Perhaps as a result of the deferment, an old camp has resurfaced with a strong central tenant: the true "spaceship". Defined loosely as a vehicle which is assembled in orbit and is never intended to land on a planetary body - although it may do aerobraking maneuvers in a planetary atmosphere. Spaceship advocates talk about lander vehicles rarely and, although the Moon is recognized as a nice buoy to fly around in a shakedown cruise, the intended destination is clearly Mars.

For many years, this camp has been silenced by a powerful force: The Mars Society and its charismatic leader. With a desire to cut out all distractions, Bob Zubrin has rallied against "Battlestar Galactica scale plans" for getting to Mars, advocating trips of endurance of small crews in tightly packed modules - small enough to fit on the top of a single heavy lift launch vehicle and launched directly from the surface of the Earth to the surface of Mars. What happened?

It seems that the last 20 years of advocating for the simple, elegant, and dangerous Mars Direct plan has been easily swept aside with just a single picture: 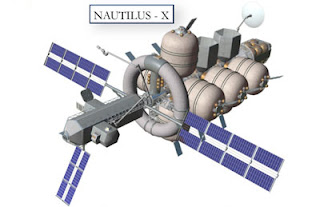 This sharp looking spaceship, with its command deck off to the side like the Millennium Falcon, and its inflatable artificial gravity ring promising Bigelow budget sweetness, has inflamed a deep longing for the sci-fi universe we were all promised - humans exploring space for years at a time with large crews.

The problem is propulsion. The tiny Firefly-like cluster on the rear of the ship is woefully inadequate for even the most advanced nuclear thermal propulsion system. The solar panel array is football fields too small for a solar-electric propulsion (or SEP) system. A chemical rocket stage to throw this vehicle to Mars and back would be so much bigger than the vehicle that we'd have trouble seeing it without zooming in... or so I've heard. How true is this objection?

The first problem comes when the objector talks about assembling the spaceship in low Earth orbit. This is an understandable assumption given that all on-orbit assembly to-date has been done in LEO, namely the international space station. However, for some time now the Earth-Moon Lagrangian points have been identified as the perfect location for staging for deep-space missions. This is not to say that no on-orbit assembly would be done in LEO, but once completed the resulting module could be ferried by a SEP tug up to L1. Whereas crew transfer vehicles would take the faster, more energetic path.

Often platforms at the Lagrangian points have been called "gateway stations" and for good reason. It takes less than 1 km/s of delta-v to go from L2 to a Mars transfer orbit. Transiting a large structure from L1 to L2 requires about 100 m/s of delta-v if you need to do it fast, but can be done with just 10 m/s or less if you take your time.

The Moon is so close and lunar water is so abundant that can be cracked into cryogenic propellants or used for radiation shielding, drinking, grow crops, etc. A purely chemical propulsion system quickly becomes feasible, but some other techniques such as solar sailing appear to be very interesting to me.

Although that could be because I just saw the latest Johnny Depp pirate movie. Arrgghh.
mars first moon first space advocacy spaceship

If you're anything like me you've probably seen the Disk Not Ejected Properly message so many times that you've forgotten how annoying it is.. despite the fact that you never even wrote anything to the usb drive that you're yanking out of your Mac the operating system insists that you remove it "correctly". You're supposed to click the eject button. Why? I dunno, Apple seems to think that if you can write to it then the operating system might have written to it - and being Apple, they probably have. Well ya know what? Fuck you, I won't do what you tell me. Note: this will not fix your external drive disconnecting when your Mac goes to sleep. For that problem try disabling "put hard drive to sleep when possible" in both the Battery and Power Adapter tabs of the OS energy saver settings. What appears below is a dirty hack for deliberately removing a warning that Apple insists on showing you every single time you yank out a usb stick.
Read more

Isn't it a bit odd that the most promising reusable launch vehicle under development today is being build by a company with a proclaimed love for heavy-lift launch vehicles? As the Falcon 9 Reusable approaches the cusp of operations, with a successful demonstration of first stage reuse expected sometime next year, SpaceX is already moving on to a methane engine - Raptor - four times as big, for a rocket - MCT - with a much larger core size. This, we're told, is Elon Musk's strategy for going to Mars and it's so much warmed over Bob Zubrin - Mars Direct, Mike Griffin - Apollo On Steroids, cargo cult of the Saturn V, stuck-in-the-1960s thinking. If you have an operational reusable launch vehicle, as SpaceX says it is their goal to have, then there's much more sensible ways to get to Mars. Come on boffins, get the lead out, let's do the math on this one. According to the best public numbers I can find , the second stage of the Falcon 9 v1.1 has a dry m
Read more

January 22, 2020
Ten years ago I got the welding bug. After doing a vocational training course I discovered my aptitude was essentially zero and on-the-job training was considered essential to improvement. Not actually having a welding job in order to be trained on, I did the best I could, assigning myself simple tasks and destructively testing my horrible creations. This involved buying my own welder, which was an education in itself. After about a month of ruining perfectly good scrap metal I got to the point where I was able to reliably produce all the welds I had learnt - without defects. My next purchase was a bucket pump so I could pressure test a range of creatively welded bits of steel. This a really cheap piece of kit that you can get just about anywhere, and it completely humbled me. My first attempt was two square bits of scrap welded over the ends of a very thick pipe. It was immediately obvious that all my previous welds had been of insufficient depth, spraying water everywhere at very
Read more